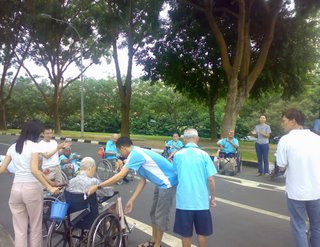 hmmm yesterday was bright & sunny @ buangkok green..and we managed to make new friends with Chan and Veronica..They were on time (and yes some of us still on way there)

We brought them around the home and with a cup of "Anlene" milk, Veronica chatted with Uncle Ah Lim and Ah Cheok. On the other hand, Chan is engaged in a battle of wits with Uncle Ah Bar and tis brought in crowds to watch them battle in chinese chess..

Yesterday quite a no. of volunteers "kai jin kou", a rare sight... keep up the good voices... Oh we heard abt the visit by Dino and Faith on Fri...they were telling us the babies look so cute..and they keep on and on and on..

Oso our hope came true, we managed to bring some elderly for a short walk, exercise and singing jus a stone's throwaway from SILRA home before we head back and go to Tan Tock Seng for hospital visit...
Posted by SILRA Home at 9:37 PM